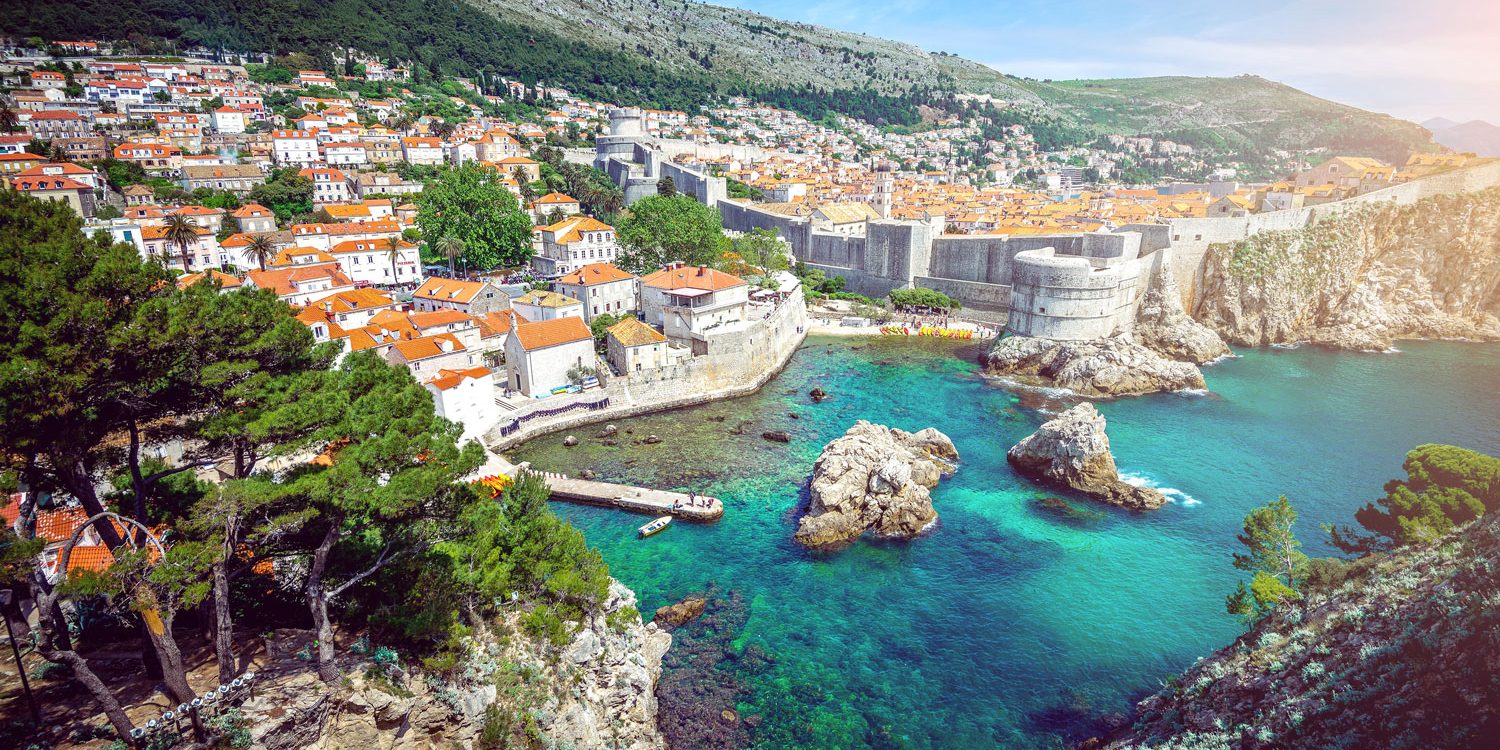 A walled, sea-battered city lying at the foot of a grizzled mountain, Dubrovnik is Croatia’s most popular tourist destination, and it’s not difficult to see why. An essentially medieval town reshaped by Baroque planners after the earthquake of 1667, Dubrovnik’s historic core seems to have been suspended in time ever since. Set-piece churches and public buildings blend seamlessly with the green-shuttered stone houses, forming a perfect ensemble relatively untouched by the twenty-first century.

Outside the city walls, suburban Dubrovnik exudes Mediterranean elegance: gardens are an explosion of colourful bougainvillea and oleanders; trees are weighted down with figs, lemons, oranges and peaches. 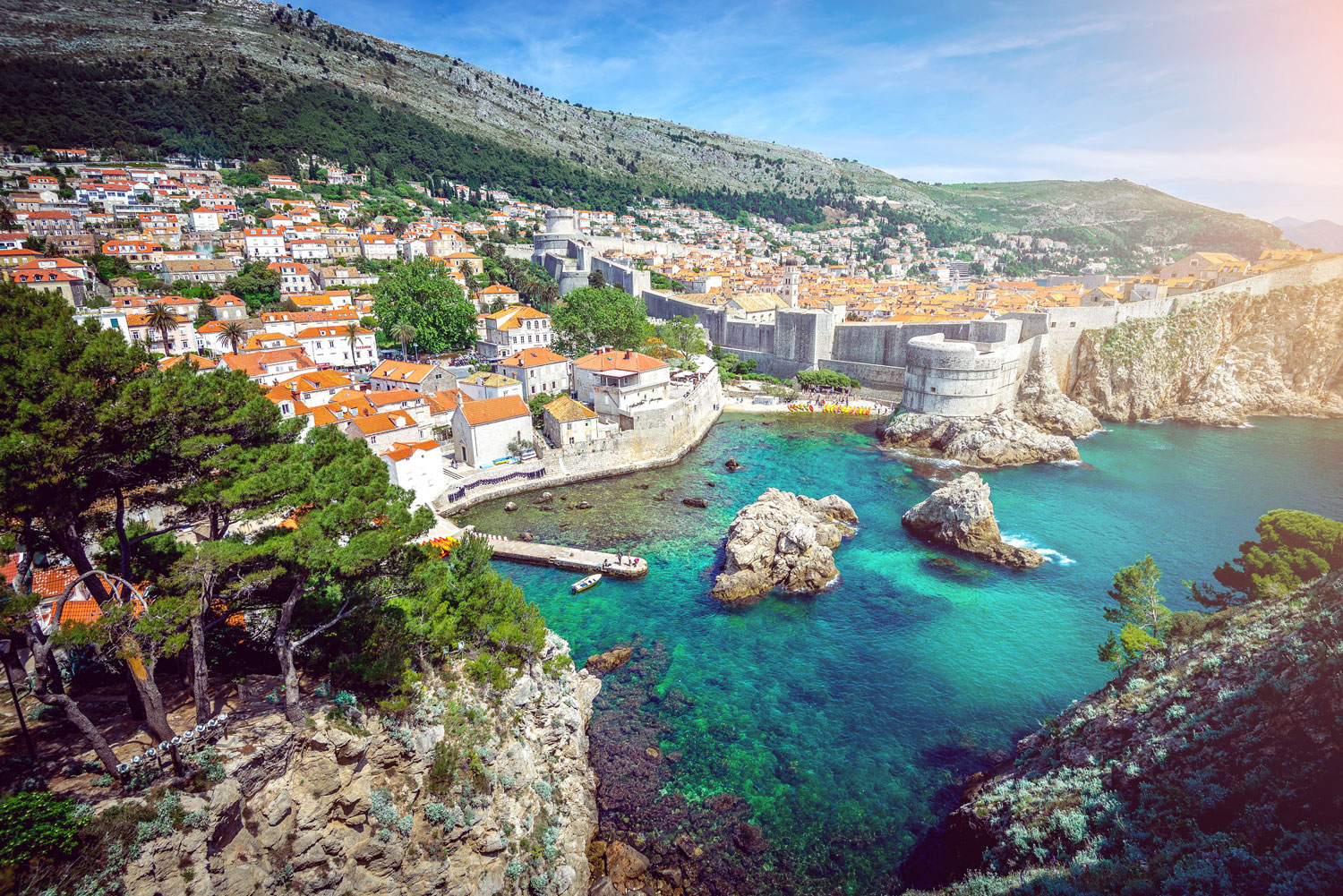 The main tourist resorts south of Dubrovnik, Župa Dubrovačka and Cavtat, are within easy reach of the city by public transport. In addition, Dubrovnik’s port is the natural gateway to the southernmost islands of the Croatian Adriatic, with the sparsely populated, semi-wild islands of Koločep, Lopud and Šipan providing beach-hoppers with a wealth of out-of-town bathing opportunities. Slightly farther out to sea, the green island of Mljet is one of the most beautiful on the entire coast – you’ll need a day or two to do it justice.

One of the most perfectly preserved walled towns in Europe, DUBROVNIK has always exerted a firm hold over the popular imagination. Its use from 2011 to 2016 as a location for HBO series Game of Thrones bestowed the city with a new and unexpected aura of otherworldly glamour – and increased visitor numbers to boot. Such layers of televisual fantasy should in no way overshadow the city’s very real place in European history, however. For the Croats themselves Dubrovnik has always served as a powerful metaphor for freedom, having spent much of its history as a self-governing city-state independent of foreign powers. The city played a more than symbolic role in the war of 1991–95, when it successfully resisted a nine-month Serbian–Montenegrin siege. Reconstruction was undertaken with astonishing speed, and the fact that conflict took place here at all only reveals itself through subtle details: the vivid orange-red hues of brand-new roof tiles, or the contrasting shades of grey where damaged facades have been patched up with freshly quarried stone.

The success of Dubrovnik’s tourist industry has brought a certain degree of complacency and self-satisfaction. The city’s museums are the most disappointing of any major Croatian city, and many local restaurateurs are focused on raising prices rather than culinary horizons. Certain aspects of the city’s appeal remain immune to tourist numbers, however, most notably the uniquely beautiful setting and the unjaded straightforwardness of the Dubrovčani themselves.

Dubrovnik is worth a visit at any time of year, although spring and summer – when life spills out onto the streets and café tables remain packed well into the night – bring out the best in the city. Croatia’s cultural luminaries visit the town during the Dubrovnik Summer Festival in July and August, bringing an added dash of glamour to the streets, while the main event in winter is the Feast of St Blaise on February 3, when the patron saint of the city is honoured by a parade and special Mass, followed by much drinking and eating. Be warned though: Dubrovnik’s popularity with cruise liners can lead to big crowds during the day, when the Old Town can resemble a vast theme park-cum-souvenir shop for shipborne day-trippers. And though Dubrovnik is increasingly an all-year-round destination, a good half of the city’s hotels are closed from November through to March, and a lot of restaurants take the whole month of January off.

With a population of a little under 45,000, Dubrovnik isn’t as large as you might think, and although it sprawls along the coast for several kilometres, its real heart is the compact Old Town. Doing the circuit of the city walls is the one Dubrovnik attraction you really can’t miss, and it’s worth doing this early on in order to get the feel of the place. The rest of the Old Town can easily be covered in a day and a half – although once you begin to soak up the atmosphere you’ll find it difficult to pull yourself away. Running above the town to the east is the bare ridge of Mount Srđ, the summit of which provides expansive views of the town and the coast. The best place for swimming and sunbathing is the islet of Lokrum, a short taxi-boat ride from the Old Town.

Dubrovnik was first settled in the early seventh century by Greco-Roman refugees from the nearby city of Epidauros (now Cavtat), which was sacked by the Slavs. The refugees took up residence in what is now the Old Town, then an island known as Laus – a name that later metamorphosed into Ragusa. The Slavs, meanwhile, settled on the mainland opposite, from which the name Dubrovnik (from dubrava, meaning “glade”) comes. Before long the slim channel between the two was filled in and the two sides merged, producing a symbiosis of Latin and Slav cultures unique in the Mediterranean. Ethnically, the city was almost wholly Slav by the fifteenth century, although the nobility preserved the use of both Latin and Italian in official circles, if not always in everyday speech.

Initially subject to Byzantium, the city came under Venetian control in 1204. The Venetians stayed until 1358, when they were squeezed out of the southern Adriatic by Louis of Hungary. Officially, Dubrovnik became a vassal of the Hungaro-Croatian kingdom, although it effectively became an independent city-state.


The emergent Ragusan Republic was run by an elected senate – fear of dictatorship meant that the nominal head of state, the Rector (knez), was virtually a figurehead. However, the republic was by no means a democracy: the nobility was the only section of society allowed to vote. Civic peace was ensured by allowing the rest of the citizenry full economic freedom and the chance to grow rich through commerce. Dubrovnik’s maritime contacts made it one of the major players in Mediterranean trade, but the key to the city’s wealth was its unrivalled access to the markets of the Balkan hinterland. The Ottoman Empire, having absorbed the kingdoms of both Serbia and Bosnia, granted Dubrovnik this privileged trading position in return for an annual payment. Dubrovnik established trading colonies stretching from the Adriatic to the Black Sea, from where wheat, wool, animal hides – and, for a time, slaves – could be shipped back to the mother republic before being re-exported to the West at a fat profit. As commerce grew, so did the need to protect it, and the republic extended its borders to include the whole of the coast from Konavle in the south to Pelješac in the north, as well as the islands of Mljet and Lastovo.


Mercantile wealth underpinned an upsurge in culture, producing a fifteenth- and sixteenth-century golden age when the best artists and architects in the Adriatic were drawn to the city. It was during this period that many of the urban landmarks of present-day Dubrovnik were completed: Juraj Dalmatinac and Michelozzo Michelozzi worked on the town walls, and Onofrio della Cava designed the Rector’s Palace, as well as the two fountains that still bear his name.

Suzerainty over Dubrovnik had passed from the Hungaro-Croatian kingdom to the Ottoman Empire by the early sixteenth century, but shrewd diplomacy and the regular payment of tributesensured that the city-state retained its independence. In the sixteenth and seventeenth centuries Dubrovnik enjoyed the protection of both Spain and the papacy, but usually avoided being dragged into explicitly anti-Turkish alliances. In fact, wars between the Ottomans and the West usually led to increased revenues for Dubrovnik, which exploited its position as the only neutral port in the Adriatic.


Decline set in with the earthquake of 1667, which killed around five thousand people and destroyed many of the city’s buildings. Bandits from the interior looted the ruins, and Kara Mustafa, Pasha of Bosnia, demanded huge tributes in return for keeping the robber bands under control. Kara Mustafa’s death during the Siege of Vienna in 1683 allowed the city the chance to rebuild, producing the elegantly planned rows of Baroque townhouses that characterize the centre of the city to this day. However, the Austro-Turkish conflict of 1683–1718 seriously affected Dubrovnik’s inland trade, a blow from which it never really recovered. By the eighteenth century Dubrovnik’s nobility was dying out, and commoners were increasingly elevated to noble rank to make up the numbers; anachronistic feuds between the Sorbonnesi (old patricians) and Salamanchesi (newly elevated patricians, named after the universities of Sorbonne and Salamanca, where many young Ragusans studied) weakened the traditional social fabric still further.

The city-state was formally dissolved by Napoleon in 1808. The French occupation of the city provoked a British naval bombardment, while Russian and Montenegrin forces laid waste to surrounding territories, destroying much of suburban Dubrovnik in the process. In 1815 the Congress of Vienna awarded Dubrovnik to the Austrians, who incorporated the city into their province of Dalmatia. Political and economic activity shifted to Zadar and Split, leaving Dubrovnik on the fringes of Adriatic society.


The symbolic importance of Dubrovnik long outlived the republic itself. For nineteenth-century Croats the city was a Croatian Athens, a shining example of what could be achieved – politically and culturally – by the Slav peoples. It was also increasingly a magnet for foreign travellers, who wrote about the city in glowing terms, save for Rebecca West, for whom it was too perfect and self-satisfied: “I do not like it,” she famously wrote. “It reminds me of the worst of England.”

Already a society resort in West’s time, Dubrovnik enhanced its reputation for cultural chic with the inception in 1949 of the Dubrovnik Festival, once one of Europe’s most prestigious, while the construction of big hotel complexes in Lapad and Babin kuk helped make Dubrovnik one of the most popular tourist draws in Yugoslavia. After repairing the damage done during the 1991–92 siege with remarkable speed, Dubrovnik quickly recovered its position as Croatia’s premier vacation spot.

Book with Holiday Hamster and you could visit the wonderful city of Dubrovnik for yourself.
Call 08000 988 955 and have a travel advisor tailor make your itinerary at the best possible price.

The above article first appeared here.